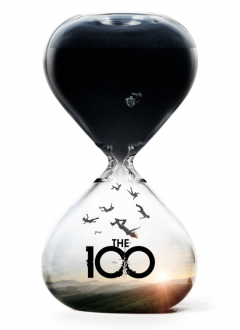 This science fiction show follows a group of young survivors who return to Earth 97 years after a nuclear war wiped out the entire population. After the nuclear war only some thousand people managed to survive in a big space station in Earth orbit. They already survived 97 years on the station and they only have to stay 100 more years for Earth to be habitable again. This would be no problem if only the station wasn’t running out of air. They decide to send a group of 100 young prisoners to earth, which should report if earth is already habitable again. But their communication system breaks at their arrival on earth, so these 100 are forced to survive on their own on a planet where they finally do not seem to be the only humans alive.

These first 13 episodes of 40 minutes each, open the way for this post apocalyptic sci-fi tv-show. Didn’t we already have enough of those?

Not of this kind. This show mixes a scenario where people are rebuilding society from zero, just as they do in ‘Lost’ with a total futuristic scenario, which makes every sci-fi content of the show seem plausible. The show tells two parallel story lines: the one on the space station, very well acted story line, where government has to deal with major political decisions concerning the survival of their citizens, this forcing them more and more often to unethical behavior. And the second story line, the one of a group of criminal teenagers believing that they now own the planet.

This second story line often shows up with horrible acting and absurd over dramatized plots like teenagers caring too much about love triangles or being cool or uncool just like at high school. This happens pretty much half of the time where these teenagers are on earth risking their lifes at any second. The other half of the time is fortunately invested in the development of the main plot. While watching it you will notice that the show doesn’t care about being dumb or clever. Some things that happen just don’t have any explanation, just as the problem causing teenager behavior, I think I’ve never seen such an unscientific sci-fi tv-show. One of the main points to be criticized is the bad acting of most of the 100 teenagers, only very few actors seem to be on the level. While the acting of main character Clarke (Eliza Taylor) didn’t convince me at any second (How can a tv-show have such a bad actress for its main character?!), some other teenagers seem very well acted to me, like Bellamy

(by Bob Morley) or Jasper (by Devon Bostick). But at least, even if the show follows all kind of teenage prototypes, it knows how to keep the story interesting with its sci-fi survival plot and a surprisingly violent and reckless story line that could remind you to other post apocalyptic tv-shows such as ‘The Walking Dead’.

Due to the two parallel story lines the show seems appropriate for all kind of audiences, both young and old.