After a NASA probe crashes on Earth, extraterrestrial life forms spread throughout Mexico, on the US border region, leading to the quarantine of the Mexico upper half. American troops and a huge wall stretching along the American border are the only things that keep the US protected. Six years after the crash, American photojournalist Andrew Kaulder (Scoot McNairy) receives a call from his employer, who tasks him with escorting his daughter, Samantha Wynden (Whitney Able) from southern Mexico back to the US. Andrew buys Samantha an expensive ferry ticket, but after enjoying the Mexican nightlife, Andrew has sex with a local girl who steals Samanthas passport. Now unable to board the very last ferry, since sea and air travel will be blocked for six months they are forced passage through the quarantine zone full of hostile life forms…

This British science fiction monster film, written and directed by Gareth Edwards confronts me with a very difficult task when having to rate it. This movie has so many positive aspects, but also so heavy defaults that it completely teared me apart. On one hand the movie has stunning visuals. Despite it’s title the movie doesn’t really show many monsters, but much rather enjoys showing us the massive destruction caused by those. Even though all the cities we see are almost

completely destroyed, the setting looks great, I can’t remember any movie showing Mexico as beautifully as in this movie. But the setting is not only eye candy, Edwards also uses the setting to tell little side stories. He raises the viewer’s concentration and immersion by putting the protagonists in a surrounding where we immediately see signals of tragic stories occurred in those places in the past.

At least the movie has those, because the story this movie is trying to tell us is probably the main deficiency it has. Since the movie starts 6 years after the NASA probe crashed, the extraterrestrial life forms spread widely throughout Mexico and all the people already seem to be used to this situation, we viewers seem to be thrown into the middle of something. And I kept feeling like that until the also very unsatisfying ending, that doesn’t feel like if any story has finished been told.

Luckily Edwards spent the energy he didn’t spend on storytelling on other things that ended up being the best aspects of the film. The social criticism he shows in the film is set-in so cleverly! Showing Mexican corruption, through the Mexicans helping Andrew and Samantha crossing the restricted area for money is just a scratch in comparison to what Edwards does to the US.

Photojournalist Andrew shocks when he explains, “I get 50.000 for a picture of a child killed by a monster. Do you know how much I get payed for a picture of a happy child? Nothing.” this way criticizes the capitalist US media for it’s almost sadist reports trying to profit from other people’s grief. He compares himself to a doctor: He needs tragedy for living. But he doesn’t cause it, he just documents it.

When Samantha sees the gigantic wall stretching along the American border she surprises us with her critical words: “I thought I’d be a lot happier to see it. 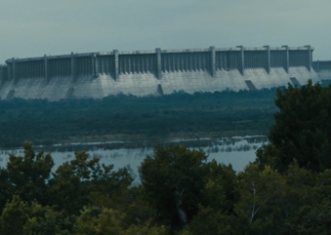 I feel like I could cry, but I don’t know if it would be a happy cry or a sad cry.” And Andrew sustains her by saying that it feels different looking at America from the outside. This immediately calls to our mind how desperate South American migrants feel when trying to enter the US and seeing such closed borders.

The dialogues are mostly between Andrew and Samantha, the two protagonists who are very well characterized with the little information we get about them. Dialogues and acting feels very natural, which is in fact a huge compliment and the characters’ evolution only recognizable through how they behave to each other is also great. The movie soundtrack is absolutely amazing and already gets me nostalgic, for all the great shots and dialogues this movie offers us. It’s too sad that Edwards didn’t manage to combine all these positive aspects with great storytelling. The plot left a bitter dissatisfaction in me which not even all these positive aspects could equalize. This movie doesn’t perform at it’s full potential, but is still a great recommendation.